The Peoria County Sheriff's Office has two K-9 units. Both dogs are a German Shepherd, born and initially trained in Germany. Upon their arrival in Peoria County, the dogs are in the care of their partner deputies 24/7 and participate in ongoing trainings with their partner for the duration of their service to Peoria County. 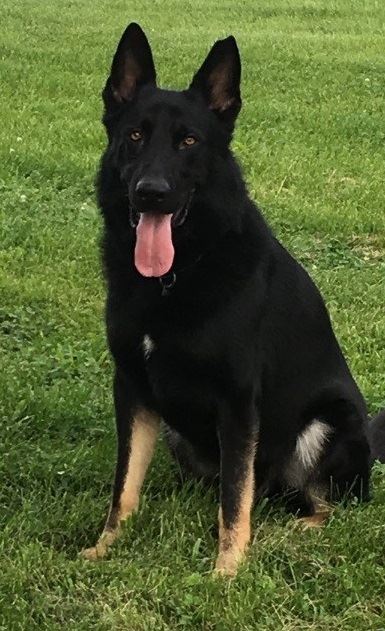 Quincy von der Hettlingshohe was born on July 21, 2014 and joined the Sheriff's Office in March of 2016. His partner Deputy JR Kester has been with the Sheriff's Office since 2013. Quincy is a dual purpose patrol K-9, trained in narcotic detection, tracking, criminal apprehension, and handler protection. Quincy has a very high toy drive and would chase his ball for hours if Deputy Kester's arm could keep up. Deputy Kester's family enjoys having Quincy home with them. Quincy shares the house with Judge, a Giant Alaskan Malamute.

Tim Vom Sankt Georg was born March 27, 2012 and joined the Sheriff's Office in February 2014. His partner Austin Griggs has been with the Sheriff's Office since 2004. Tim is a dual purpose patrol K-9, trained in narcotic detection, tracking, criminal apprehension, and handler protection. When he is off duty, Tim enjoys going on walks, playing with his jolly ball and Kong, and running around with his new sibling Ellie, a Labrador retriever.